Yesterday, Tricia over at Apiarylandlord (UK) told me about another method for moving bees a short distance. She wrote in part, “If you are moving them significantly less than 3 miles and more than 3 feet, you might like to use a trick I read about . . . [The author] said that he could […] END_OF_DOCUMENT_TOKEN_TO_BE_REPLACED 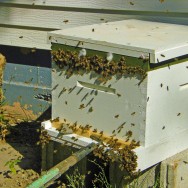 Do you remember the Stockholm Syndrome? It’s a behavior seen in some hostages in which they develop sympathy for their captors, often to the point of defending them. The most famous case in America is Patty Hearst who, after being captured by the Symbionese Liberation Army in 1974, eventually joined them and helped rob a […] END_OF_DOCUMENT_TOKEN_TO_BE_REPLACED 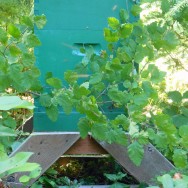 How to move a hive

You hear it all the time: you can’t move a hive a short distance because the field force will return to the original location of the hive and become lost. The usual advice is that you must move the hive at least two miles away, give the bees a few days to reorient themselves, and […] END_OF_DOCUMENT_TOKEN_TO_BE_REPLACED

Footprint pheromones, also known as trail pheromones, are common in social insects. Researchers found that surfaces where honey bees have walked become attractive to other honey bees. This observation led to the discovery that honey bees secrete a chemical signal (pheromone) from their feet as they go about their daily business. At present not much […] END_OF_DOCUMENT_TOKEN_TO_BE_REPLACED