Want to hear what the queen has to say? James Graham sent the following two short clips of queens piping in his top-bar hive. He said his bees swarmed about a week ago, and he believes these piping queens are the potential heirs. The first clip is short. The second is longer, with a silent portion […] END_OF_DOCUMENT_TOKEN_TO_BE_REPLACED 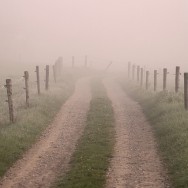 About ten days ago, on a cold and gusty mid-April day, I was making the rounds of my hives. All the colonies were tucked in against the 40-degree mid-morning sunshine. All but one. Inexplicably, one hive had a group of about 200 bees frantically fanning at the opening. Other bees were nearby clutching blades of […] END_OF_DOCUMENT_TOKEN_TO_BE_REPLACED

Cell phones and bees: hang up and forage!

In graduate school I took a class from Gerardo Chin-Leo, a passionate and intelligent faculty member at The Evergreen State College. The class was about harmful algae blooms, but the first assignment was to find articles in the popular press and compare them to the scientific papers they were supposedly based on. OMG. It was […] END_OF_DOCUMENT_TOKEN_TO_BE_REPLACED 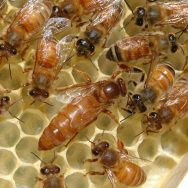 Honey bee queens make specific sounds during certain periods of their development. These sounds have been described by humans in various ways—including bleating, mewing, croaking, and honking—but some consensus has been reached on what they mean. All these terms describe forms of queen piping. Piping is the sound made by a virgin queen while she […] END_OF_DOCUMENT_TOKEN_TO_BE_REPLACED